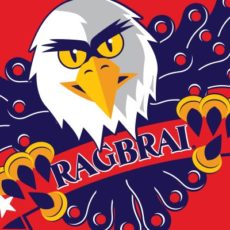 As far as I could see ahead there were bikers and as far as I could see behind there were bikers. And it stayed that way all day long; regardless of how many stops we made.  As we entered a town we would have to get off our bikes and walk because there would be hundreds, and sometimes thousands, of bikers enjoying the variety of food and entertainment, and riding would be impossible. What was this event? RAGBRAI 2000!

RAGBRAI (Register’s Annual Great Bicycle Ride Across Iowa) started in 1973 with 120 riders and grew the next year to 2,000. By 1985 it had grown to 10,000 and has held steady at about that number ever since. It is considered by most to be the granddaddy of all cross-state rides. Some view the ride from the Missouri River on the west side of the state to the Mississippi River on the 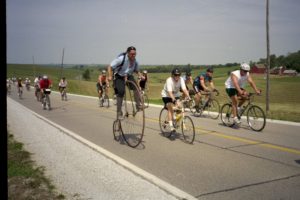 east side as a family outing, others a vacation and some are just in it for the challenge. This 28th RAGBRAI attracted over 10,000 bicyclists from all 50 states and 12 foreign countries. Most days there were closer to 14,000 due to one-day riders. And the two days that we were close to Des Moines, radio stations were estimating over 25,000. The oldest rider was 82 and the youngest just 5. The routes over the years have averaged about 470 miles with this year being 490 miles (I finished with 501 after some trips into town).

My RAGBRAI experience began back in January when I applied to see if my name would be one of the 8,000 selected in the lottery held in April. On May 1, I received confirmation that I was in. Then the anticipation of the ride began, and I started feeling like a child waiting for Christmas. I knew only one other person that was going, a good friend from Georgia. Finally, July 20 arrived, and I was on my way to Iowa and very excited about the week ahead (it doesn’t take much to excite some of us). We arrived at Council Bluffs, the beginning town, on Saturday afternoon and set up our tents. Then thousands of bikers began arriving and the RAGBRAI experience began. There was a lot of different food and I began trying it all! And that pattern of eating continued all week. The next morning the ride began, and I had never seen anything like it. The roads were full of bikers, but no cars! Most all roads that we traveled were closed to most traffic. However, there aren’t very many homes outside of town, so the traffic is probably very light most of the time anyway. During the day we would pass through three or four small towns where there would be a town square or town park. The towns would be closed to vehicles and food vendors would line the streets or parks. Hundreds of bikers would be there enjoying the food and entertainment or just relaxing for awhile. Many would be waiting in line for the next available porta-john while others would avoid the long lines and head into the nearest cornfield. When we would eventually leave town (with hundreds of bikers still there and hundreds more still coming in) we would ride to the next town to find the same thing again! And hundreds of riders would be strung out from one town to the next. You were never more than a few feet away from more bikers from the beginning of the day to the end of the day. This is not a ride for those who do not like crowds.

What makes RAGBRAI so different? To me it was the enormous size of the ride. At night there would be people camped all over town. Many of the local people would allow bikers to put up tents in their yards. Also, there would normally be about three main camping areas scattered around town. Many 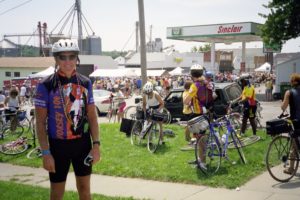 more would stay in homes and churches. They would be everywhere! And then there is the experience of getting a shower. Unlike previous rides that I have been on where showers were available at schools or from a shower truck, showers on this ride could be anywhere. Sometimes they would be in special tents that were set up with room for about 50 people to take a shower at a time. Other times they would be at a converted car wash. Sometimes just a water hose would work. And nothing is free. One could expect to pay $2 for a shuttle bus to go get a $2 cold shower. One night we were so far back in a county park that we had to pay .50 cents to ride a shuttle bus to the front gate, so we could catch another $2 shuttle bus to ride to town. And the price of food would vary from town to town. Except for one night there was a good variety of food and plenty of it. We were hooked on the sweet corn, rhubarb pie and homemade ice cream. And there were 1½-inch pork chops from the “Pork Chop Man”, rib-eye steak sandwiches, pork loin sandwiches and “Walking Tacos”. And of course, all kinds of homemade cookies, brownies and cinnamon rolls. I thought that at first this would be an inexpensive bike tour, with its $95 rider fee. But after paying for shuttle buses, showers, souvenirs, food, food and more food, I spent much more than I anticipated. Was it worth it? Absolutely! I had a great time! And the people of Iowa were fantastic! They love bikers. They would set in their yards and watch and wave, as we would ride by. Little kids would line the streets in some towns and give “high fives” and shoot you with water guns. Many towns had decorations and signs welcoming us. They would holler and ask where we were from. And they loved to talk to you and ask questions, especially from us “southerners”. One local lady asked some party guys from New York if they had trained very much for the ride and they replied, “Yes, we did, we started drinking back in January”. Would I recommend this ride? Sure, to those who have plenty of patience, don’t mind crowds and are determined to have fun. I’ve gone on previous bike rides by myself and always met new friends and had a good time. But I know that having a friend to hang out with on this ride had a lot to do with making it such a memorable experience. So, round up a friend or two and plan a trip to Iowa the last full week of July and experience RAGBRAI for yourself. You’ll be glad you did.